“A certain kind of magic is born when the curtain rises. Intoxicated by the smell of the greasepaint and powered by the glow of the footlights, lovers successfully elope, villains get their just deserts and people die in epic stunts and yet live to tell the tale.” 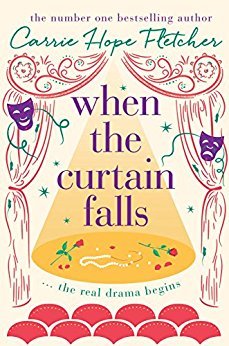 Blurb: “In 1952 two young lovers meet, in secret, at the beautiful Southern Cross theatre in the very heart of London’s West End. Their relationship is made up of clandestine meetings and stolen moments because there is someone who will make them suffer if he discovers she is no longer ‘his’. But life in the theatre doesn’t always go according to plan and tragedy and heartache are waiting in the wings for all the players . . .”

Almost seventy years later, a new production of When the Curtain Falls arrives at the theatre, bringing with it Oscar Bright and Olive Green and their budding romance. Very soon, though, strange things begin to happen and they learn about the ghost that’s haunted the theatre since 1952, a ghost who can only be seen on one night of the year.

Told through Past and Present narratives, the reader learns of the great tragedy that befell Fawn Burrows during a performance of When The Curtain Falls and things turned out that way. In the present, the production has been rebooted and the leads Oliver and Oscar are unable to ignore the ghostly happenings plaguing their rehersals. I can’t remember if I’ve ever read a book set in a theatre and, as someone who goes to the theatre often, this was a nice,refreshing change of scenery. Alongside that, as Carrie Hope Fletcher is well known for her acting roles, the book reads like she is very much in her comfort zone.

I liked the feeling of things coming full circle: Fawn and Walter’s love story and how in ways it mirrors Olive and Oscar as the show gets underway. There are themes of self worth and stength littered through the story well.

However, those are the only good things I really have to say. The initial premise had me intrigued but I’ve had an issue with every single one of Carrie’s fiction books. Her characters never seem to grab me and *When The Curtain Falls* is no different. I’ve discovered that my main grievance is with her actual writing style and that is not as easily solved as a different plot. There’s one chapter set in the past which reveals the exact details of that aforementioned tragic event and then the chapter following it is a present day where Walter reveals the details to Oscar of what we’ve just seen. Which seemed a really odd choice but I guess the true drama of the book would have been fine if the former was removed.

I think, overall, that Carrie’s books are just not for me.