“Last night changed me. I don’t wanna walk around all pissed off and looking for problems, but I know I can’t continue to pretend nothing’s wrong.” 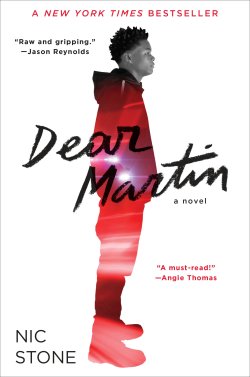 Blurb: “Justyce McAllister is top of his class and set for the Ivy League—but none of that matters to the police officer who just put him in handcuffs. And despite leaving his rough neighborhood behind, he can’t escape the scorn of his former peers or the ridicule of his new classmates. Justyce looks to the teachings of Dr. Martin Luther King Jr. for answers. But do they hold up anymore? He starts a journal to Dr. King to find out.”

Note: I am aware that as a white reviewer I have privilege and can’t fairly comment on the racial aspects of this book. Any Own Voices reviews are greatly appreciated and I will add them here.

In an attempt to “examine current affairs through the lens of Rev. Dr. Martin Luther King Jr.’s teachings”, Nic Stone began writing her debut after seeing the responses to the real-life shooting of unarmed African American teenagers.

Dear Martin follows high school senior Justyce McAllister who starts to question his racial identity after spending three hours in handcuffs for something he didn’t do. Classroom discussions and societal stereotypes come to the forefront of his attention more than they did before. When introduced to a gang, he identifies them as “the ones that make us look bad” and starts to worry more about everything he has to lose.

The book flits around different formats from more script based interactions for the classroom discussions, to prose for present happenings, to the letters. It’s the latter that really stood out to me. Letter writing to someone who won’t read the letters, especially an idol, can be so cathartic and it seems to work for the protagonist. While Justyce feels like he must remain silent in his daily life, especially when topics of equality come up, his letters to Martin Luther King are raw and unfiltered; it’s in these moments that it feels like the reader get the “real” Justyce.

The media fallout following another shooting by a police officer mimics what readers see too often in the real world and the predictability of questions thrown in front of Justyce are predictable and not surprising.

It was interesting to have the white male character, Jared, who starts off as someone who “doesn’t see colour” and truly be lives society is equal start to shift with the events of the book, to the point where he starts to acknowledge his privilege and own up to things he’s said and done in the past. Which is the kind of person I think all of those in a similar positon to him should be trying to do in our own lives.  Alongside this is a white girl called SJ who acknowledges her position from the start but speaks out on important issues and also helps lift up and push Justyce to the front as his voice is more important.

I found it thought-provoking that Dear Martin didn’t just focus on what it means to be a black boy in society, but how that transends into older age: The dad of Justyce’s best friend, Manny, talks about how he has a position of power at his current employment and yet his white colleagues still look down to him or refuse to answer his requests. All of which prompts the further questions in Justyce’s mind of “is this my life now?”

This book can seem almost simple at points. Like I mentioned earlier, certain chapters are just listed dialogue between characters and it feels very reserved in places, but a lot of this is down to it being a lot shorter than I expected. But it still leaves your heart aching at the end. In just over 200 pages, Dear Martin has the reader in the palm of its hand with a protagonist to root for from the very first page, until the very end. My only wish is that it was longer.