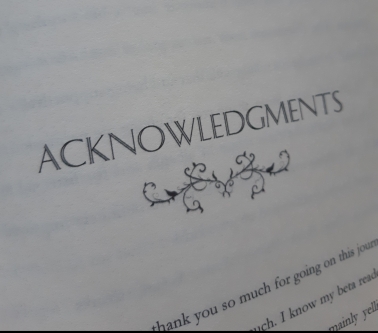 Back in the day, before the internet, (yes I am that old) the only way I could learn more about those people behind the books was through acknowledgements. I didn’t even know what my favourite authors looked like, so it was a chance to peek behind the curtain in some way.

Book acknowledgements are stories in themselves. A name that could mean nothing to me, means everything to someone else. Did they sit there over coffee with the author who groaned endlessly about a chapter that didn’t work? Have they been life-long friends? Maybe they’re another writer who understands the plight of creating a new world. As social media has developed and expanded, readers can now interact with their beloved creators on a daily basis. We feel closer as we see their friendships play out in the virtual world (take Becky Albertalli, Adam Silvera and Angie Thomas, for example). Those names littered in the acknowledgment are often familiar now, but it doesn’t make them any less magical.

When a close friend of mine, K.M.Robinson, released her debut book Golden, I was overjoyed to read it after hearing about it for so long. At the time of writing this (I say that because she is a machine and could have written five more by the time this is posted), she has sixteen books out in the world. As I reached the inevitable end, I turned to the acknowledgements and froze when I saw not just my name, but a whole paragraph dedicated just to little old me. I will be grateful for this for the rest of my life.

My favourite thing about it is that it’s a collection of inside jokes. To anyone else, this is jut nonsense;  a weird footnote in a list of thank yous. But to me, it is everything. 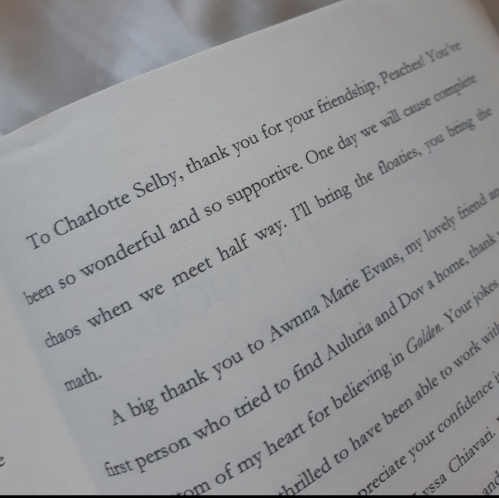 4 thoughts on “Why I Love Book Acknowledgements”