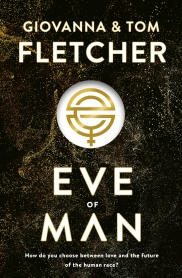 It’s no secret that I’m a big fan of both Tom and Giovanna Fletcher’s books. However, when I saw the announcement that they had written a YA book titled Eve Of Man, I was very sceptical. As they are established in their respective age ranges – Tom being a children’s author and Giovanna being an adult romance author – it felt like a strange merge and almost an invasion for them to step into the world of young adult.

Pitched as an “unconventional love story”, Eve of Man takes place in a world where no girls have been born for fifty years. The human race is facing extinction… until Eve. She is Earth’s last hope. Told through two perspectives, readers learn about Eve’s life inside the dome and Bram; one of the many people watching over her.

At the time of writing this post, I am 52% into the audiobook and it’s safe to say that I am really struggling not to give up on it. The story is narrated by two people: Charlotte Ritchie for Eve’s chapters and Josh Dylan for Bram’s. My big issue is that the latter is incredibly boring. While the writing itself shows the passion Bram has, the dramatization makes it seem like the character is just bored and doesn’t really care about Eve. There’s not real vocal changes to represent the characters to I have to rewind a lot to understand which character is saying the dialogue. Eve is much preferable and has that typical style to it that will be recognisable to fans of Giovanna’s books and, because the dramatization is infinitely better, I’m enjoying her chapters a lot more.

The writing itself is really clunky, especially in Bram’s chapters and overall there’s so much telling rather than showing. In these kinds of futuristic stories, I like being given a few breadcrumbs then just thrown in with the character. Whereas in Eve of Man  I’m taken out of the moment a lot as a scene takes place and it suddenly halted for a few minutes of info-dumping.

I plan on going into more concise detail in my full review but I will briefly mention the issues raised about gender stereotypes in this book. To me, it’s understandable that the story has gone down such a confined route, and that there’s a lack of mention for sexualities, but  it seems odd not to bring mention to infertile women in the quest to birth a girl.

Have you read Eve of Man?

What did you think?

3 thoughts on “Audiobook Of The Month | Eve Of Man”