“He was liked when noticed, but not noticed much, and that did him no harm either.” 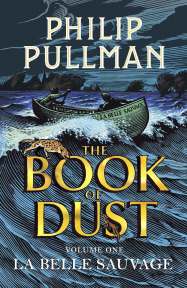 Blurb: “Eleven-year-old Malcolm Polstead and his dæmon, Asta, live with his parents at the Trout Inn near Oxford. Across the River Thames (which Malcolm navigates often using his beloved canoe, a boat by the name of La Belle Sauvage) is the Godstow Priory where the nuns live. Malcolm learns they have a guest with them, a baby by the name of Lyra Belacqua . . .”

I have a confession to make: prior to reading La Belle Sauvage, I had never read any of Philip Pullman’s work before. Actually, that’s a small lie. When having a discussion about this book with my mother she told me that we did attempt to listen to the audiobook on a car journey to France once but we ended up swiftly abandoning it because none of us were enjoying it. However, I have no memory of this so let’s pretend I was entirely new to his books.

The story follows a boy called Malcom who is the son of an innkeeper and lives in an alternate Oxford with his daemon Astra and canoe named La Belle Sauvage.  His everyday life is disrupted when a group of strange, important-looking people show up looking for a baby called Lyra.

The great thing about this new series is that you don’t need to have read His Dark Materials in order to fully understand this timeline. Philip Pullman himself has described The Book of Dust as an “equal” as the series will take place before, during and after the events of his previous one. Of course, there are things the reader is more likely to pick up on if they are familiar with His Dark Materials but it’s not a requirement to be entirely in the know. Having said that, I did get confused at some points and found myself looking to the wiki for answers: in one case when the aletiometer was introduced (which I discovered is a “compass-like device” that communicates with dust and can find the truthful answers to questions. Only six exist in this universe).

I loved the idea of everyone having their own daemon and how they were so quick to defend their person and found some of the conversations into dust and identity interesting but these were much more limited than what I had been led to believe by others who had read this book.

The really big problem I had with La Belle Sauvage fell down more to my own expectations. I went into it expecting a big high-fantasy adventure and instead had to sit through a more character-driven, low fantasy, slow burn. There are many action-packed scenes but it really has that feel of being the book to set up the rest of the events to come. I found myself rather impatiently plodding along, and persevered to the end to try and understand why everyone else seemed to be enjoying this book a lot more than me.

Overall, I just found it bland and that none of the characters really stood out despite the situations they were put in. But at least I tried a new author, even if it didn’t quite work out how I hoped it would.