“Why do you keep calling me Kirstie, Mummy? Kirstie is dead. It was Kirstie that died. I’m Lydia.” 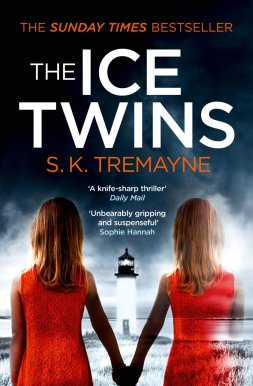 Blurb: “After one of their identical twin daughters, Lydia, dies in an accident, Angus and Sarah Moorcroft move to a remote Scottish island, hoping to men their shattered lives. But when their surviving child, Kirstie, claims they have mistaken her identity – that she, in fact, is Lydia – their world comes crashing back down. They know one of their daughters died. But can they be sure which one?

The story follows Sarah and Angus Moorcroft who have been struggling with the death of one of their twin daughters. They decide to move to a remote Scottish island – left to them in Angus’ Grandma’s will – in the hopes that a fresh start will bring with it better memories. But when the surviving twin Kirstie claim that she is in fact Lydia, Sarah starts to spiral down a path to dark places. Could it be possible that she identified the wrong child?

The character of Sarah Moorcroft was by far the most fascinating thing about this book. Her chapters allow the reader to really get inside her head and after a while it’s easy to understand why her mind goes to certain places. They helped really emphasise the creepy elements of the story and show the cracks forming in her relationship with her husband. Angus’ chapters brought the story to a halt and I feel that a lot of the twist and turns were spoilt by having the inside of what he knew. It would have worked much better if the story was solely from Sarah’s point of view and instead followed her thoughts on whether she did in fact bury the wrong child and how that could have happened, without the outside perspectives weighing in.

The exciting part of reading a thriller is the guessing; trying to work out what’s really going on. This book has that element to it with Sarah obsessing over her daughter’s behaviour after learning the truth but a lot of alternate reasons for how the accident happened are included and it kept steering the story off path. It was like these ideas were taken and clumsily put in as fact, making it really hard to follow at times.

It’s a book I considered buying for a while and felt I’d made a good purchase but I was wrong.